OMG! Who knew oatmeal could be so funny??? (brought to you by the letter “O”)

Oh. I guess you were thinking this was going to be about the health benefits of oatmeal. That’s understandable.

It’s about THE Oatmeal.

The Oatmeal is the website and comic drawn by very funny guy and fellow Pacific Northwest resident, Matthew Inman.

My introduction to The Oatmeal came by way of a Twitter follower who noticed I was a running freak and sent me Inman’s drop-dead hilarious comic entitled, “The Do’s and Do Not’s of Running Your First Marathon.” 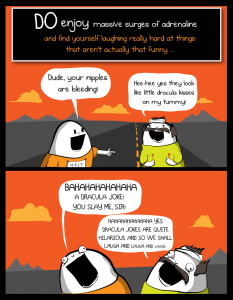 It was 2011 and I had just trained for and run my first marathon. To say that I identified with nearly every painful but riotous observation is no overstatement. (Okay, the bleeding nipples phenomenon is a guy-thing, but pretty much everything else.)

Other titles that make me laugh and snort beverages out my nose include: “My Dog: The Paradox” (the dog owner in me chortles), “15 Things Worth Knowing About Coffee” (the Seattleite in me howls), and “Why Working From Home is Both Awesome and Horrible” (the yes-I-really-have-been-working-all-day-even-though-it’s-4pm-and-I’m-still-in-my-jammies self-employed writer in me shrieks maniacally).

What does any of this have to do with weight loss and healthy living???

I suppose you could calculate how many calories you burn laughing at this silly stuff, but the point is much bigger than that.

The point is: life is meant to be enjoyed!

There’s something so cathartic and liberating about letting go of all your responsibilities and obligations for just a moment to laugh at something funny. They’ve done scientific experiments on actual human subjects and found that they’re happier when they’re laughing. Go figure. Being able to decompress with a little humor gives a much-needed relief value for our hectic lives.

Is it going to help you lose 20 lbs? No, probably not. 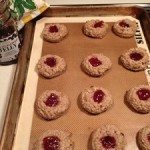 But make a point to spend a few minutes every day, with a cup of coffee and maybe one of my Vegan Thumbprint Cookies – they have old fashioned rolled oats in ‘em, if you need a tie in – and do something that is just pure fun.

Life’s too short; lighten up!

PS- While The Oatmeal is hilarious, he’s also my competition in The 2014 Best Local Personality on Twitter contest (I beat him last year, so ya know, I want bragging rights again). Cast your vote for me above and let’s see who brings it home this year!

9
SHARES
FacebookTwitterSubscribePinterest
Tumblr
In-Person Personal Training
Work with me one-on-one to improve lean muscle mass, cardiovascular endurance, and functional movement through weightlifting, body weight strengthening, and resistance training.
Learn More
Healthy Life Coaching Online
Whether your goal is to lose 100+ pounds (like I did!) or to break through long-standing barriers, we will empower you to reach your goals through evidence-based practices that will transform your health, happiness and longevity.
Learn More