Maybe you’re asking yourself, if dinner is roughly 300 calories and it’s primarily vegetables, what in the heck can I have other than rabbit food?!?

In Tuesday’s blog I shared one of my all-time favorite salad recipes “Spinach Salad with Dried Cranberries and Gorgonzola.” It’s one of a half-dozen or so salads that I make frequently for dinner. I can vary it based on what I have on hand, what’s in season, or just what I’ve got a hankerin’ for that night.

There’s a Greek salad that I’ll share with you soon that’s gonna have you smashing plates and cheering “Opa!”

Today I want to give you some more examples of non-salad, mostly vegetable entrees that are right in the neighborhood of 300 calories.

In no particular order because they’re all amazing: 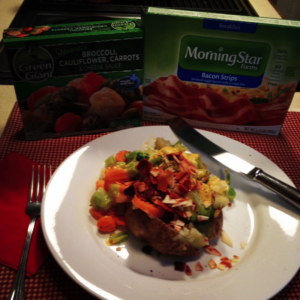 3) Amy’s Frozen Entrees: specifically, I like the Indian Palak Paneer because I dig Indian food, plus it’s great in a pinch when I have less than zero time. One serving, 300 calories.

5) Dining out option: You may be surprised, I’m not a fan of most restaurant salads. They’re typically weighed down by too much meat and / or cheese and drowning in salad dressing. When I eat dinner out I do one of two things: order something light off the appetizer menu (Ahi Tuna is usually perfect for this) or I get a bowl of soup. Many soups have fewer calories than the salads on the menu and in most cases they’re yummier too. Chicken tortilla or enchilada soup (Chili’s has one for 380 calories) is usually a good option, as are French onion (Applebee’s has one for 330 calories) and tomato basil soups. Even broccoli cheddar (Panera Bread has one for 330 calories) or cream based soups (baked potato, clam chowder) are in the 400 calorie range, which is pretty darn good for a restaurant meal. Just pass on the bread and make this a rare indulgence.

There’s no reason a dinner comprised mainly of vegetables shouldn’t be healthy and delicious.

But keep in mind that we’re turning down the heat on our metabolism late in the day so there’s not a lot of fire to burn through the calories you eat at dinner and beyond. Overindulge and those calories are gonna be with you long after the meal – in the form of excess weight! It’s easy to do too, since we’ve been conditioned to eat a big evening meal centered on meat and grain products.

But when we’re trying to lose weight we must call every eating decision into question. That includes what you put on your dinner plate.

Losing weight is hard, but it gets easier when you’ve loaded your arsenal with healthy, readily available, easy-to-make dinner recipes that will satisfy you while also helping you meet your healthy living goals. And you’re so damn worth it!

66
SHARES
FacebookTwitterSubscribePinterest
Tumblr
In-Person Personal Training
Work with me one-on-one to improve lean muscle mass, cardiovascular endurance, and functional movement through weightlifting, body weight strengthening, and resistance training.
Learn More
Healthy Life Coaching Online
Whether your goal is to lose 100+ pounds (like I did!) or to break through long-standing barriers, we will empower you to reach your goals through evidence-based practices that will transform your health, happiness and longevity.
Learn More