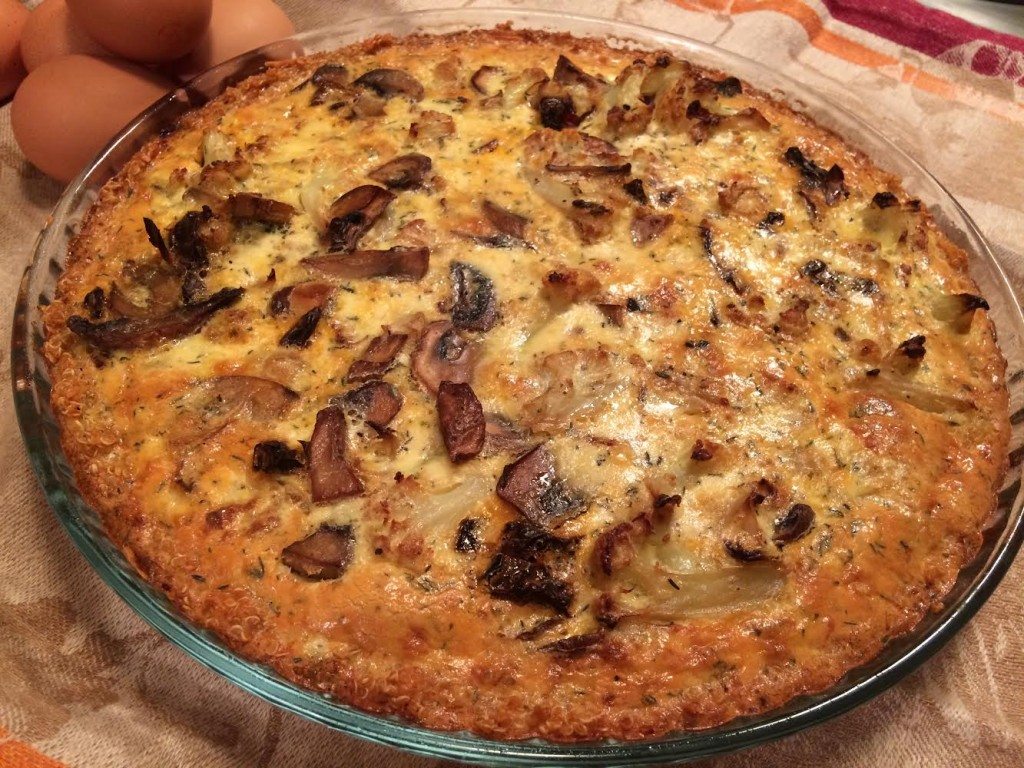 I’ve been wracking my brain trying to come up with a healthier way to make quiche. Everybody loves quiche, whether you’re entertaining or just making a simple Sunday breakfast for the fam. The magic of this recipe is the quinoa crust. It’s got a nutty taste that’s a departure from the standard pie crust, and the calorie count is a departure from pie crust too! Make it for the whole crew, or make it for yourself and have breakfast covered for the week. Serves 6.

Directions:
First, make quinoa crust by bringing the quinoa and water to a boil, reduce the heat, simmer, covered, until tender and most of the water has been absorbed, about 15 minutes. Remove from heat and let sit covered for 5 minutes. In medium mixing bowl, combine quinoa, egg and parmesan. Press into the bottom of a pie plate and bake in a preheated 375F oven until lightly golden brown, about 10 minutes. Set aside.

Next, lay cauliflower, mushrooms and sundried tomatoes on a cooking spray-coated baking sheet in a single layer and season with salt, pepper and thyme. Roast vegetables in a preheated 400F oven until they start to caramelize, about 20-30 minutes, stirring half way through.

In medium mixing bowl, whisk together softened goat cheese and half-n-half until blended. Stir in eggs until fully incorporated. Add cauliflower, mushrooms and tomatoes to egg mixture. Pour into crust and bake in a preheated 375F oven until golden brown and set in the center, about 40 minutes. Test doneness with a toothpick or knife inserted into the center of the quiche. If it comes out clean, it’s ready. Let sit for 30 minutes before slicing. Enjoy!

165
SHARES
FacebookTwitterSubscribePinterest
Tumblr
In-Person Personal Training
Work with me one-on-one to improve lean muscle mass, cardiovascular endurance, and functional movement through weightlifting, body weight strengthening, and resistance training.
Learn More
Healthy Life Coaching Online
Whether your goal is to lose 100+ pounds (like I did!) or to break through long-standing barriers, we will empower you to reach your goals through evidence-based practices that will transform your health, happiness and longevity.
Learn More