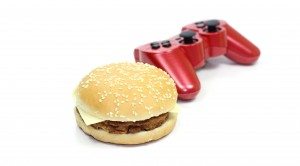 The kitchen may be the hub of the home, but wherever there are screens – TVs, computers, laptops, tablets, video games, smartphones or iPods – that’s where you’ll find kids. And truthfully, most of us grown-ups, too.

The average American 8-10 year-old spends eight hours per day in front of screens. Teens spend closer to 10-11 hours per day. That’s more than they spend sleeping or going to school!

Most screen time is inactive time.

There are plenty of voices warning parents not to let kids spend too much time in front of screens, for all the reasons we’ve heard before. And they’re absolutely right, especially when it comes to the link between screen time and obesity.

But even though the experts are right about the negative effects of screen time on kids’ health – inactivity, the deluge of advertising (especially unhealthy foods), mindless eating that accompanies screen time – none of these is as destructive as the isolation that comes with spending a lot of time on media.

The social isolation that comes with overuse of media is at least as destructive to kids’ long-term health as the more commonly stated reasons.

Kids are no different from adults in this matter; they crave connectedness. They want to feel valued and understood. They want to know that their presence makes a difference in their family. They need to feel that they contribute something.

They learn those things by interacting with others, by having responsibility within the family, by having their contributions acknowledged and appreciated. They learn to put food in perspective while around the dinner table; they learn that food is a source of pleasure and nourishment, but it does not replace human interaction.

When children feel engaged and validated they learn to turn to people rather than food for comfort.

It sounds so basic, doesn’t it? And intuitively we all know it. But we’re busy and tired; we let things slide because it’s easier. And it seems to be what they want, right? They want to be in their rooms, alone, watching TV or on the internet.

On a very fundamental level, though, it’s not what they want. They want connectedness. They want acceptance.

They want to know that they matter.

That takes some effort on our part, as parents. I can’t think of anything more meaningful that you can give your kids, even though they might say they’d rather have an iPhone 5.

Losing weight is hard, but when you establish a home environment where kids feel appreciated and valued it’s so much easier. And who’s more worth it than them?!?