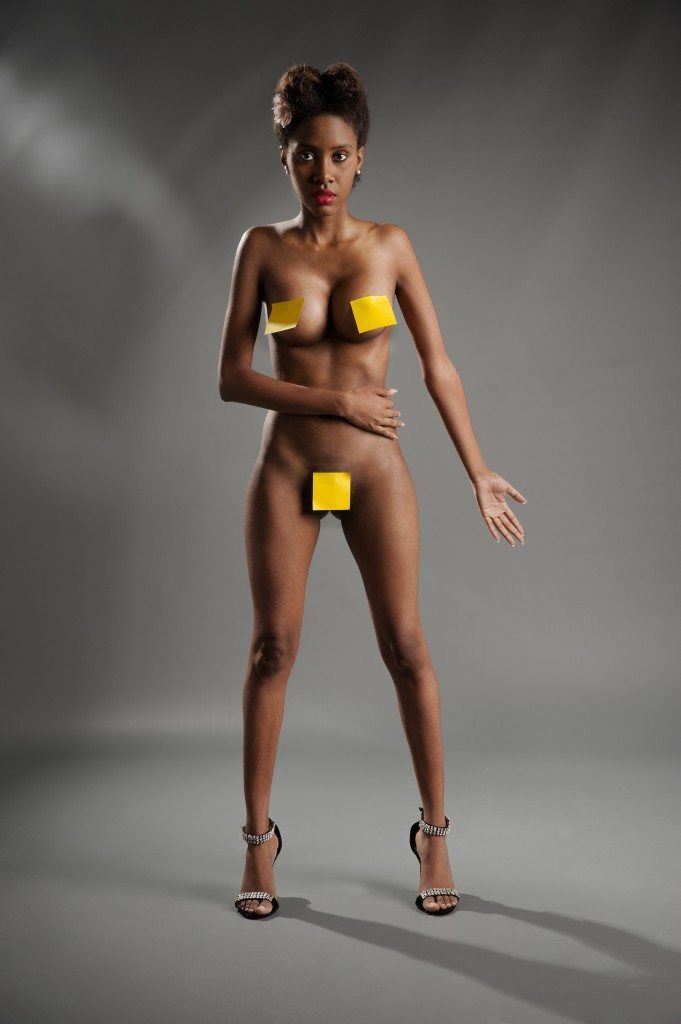 It was about six weeks ago something occurred to me that really shook me to my core. I’m a little embarrassed to say that I hadn’t thought of it before. I’ll get to what triggered this epiphany in a sec, but the thought I had was just this: my body image hasn’t really changed since I lost weight. That is to say, even though I’m no longer overweight, my body image is still controlled by the same external forces that held me hostage when I was obese. 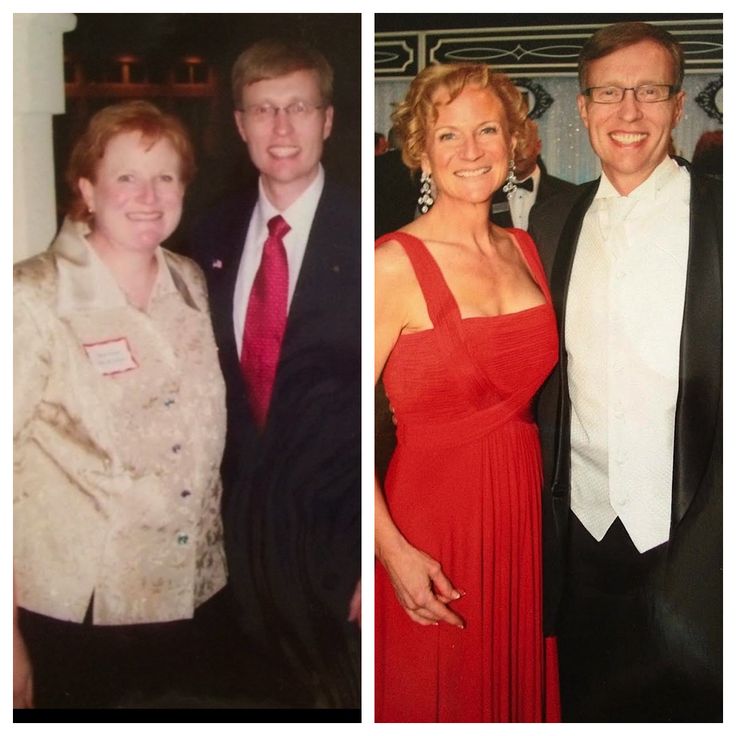 That’s my husband and me, before and after my weight loss.

Here’s what I mean: when I was obese I felt horrible about my body. I hated looking at my own reflection. I literally never looked at myself below the neck if I could possibly avoid it. I avoided having my picture taken like the plague and I would avert my eyes if I happened to catch my reflection in a window. It won’t surprise you, this is a horrible way to live. No one should feel so disgusted with themselves that they can’t even look in the mirror. But I was so sickened by what I saw when I did look, that I tried very, very hard not to look.

It’s easy to think that this problem would be resolved now that I’ve lost weight. And in truth, until I had this revelation a few weeks ago, I thought I had beaten it. After all, I don’t mind looking at myself in the mirror now. I try not to fuss too much about hair, makeup, clothes and all of that (though who doesn’t love finding just the right pair of shoes, am I right?), but even though I walk around in workout clothes just as often as street clothes now, I still try to look nice and I feel pretty good about achieving that most days.

So all these years after my weight loss I figured, yeah, I’ve got this body image thing licked!

But after coming across two young women whose stories I’m going to share in a moment it hit me like a ton of bricks: No, I am still using external input for validation that my body is “good enough.” My feelings about my body are still conditional on what I look like, even though now they’re tied to my looking good rather than looking bad (or what I thought was bad, anyway). What I realized in that moment is that I’m no more free from the external definition of “good enough” now – at a normal weight – than when I was obese.

What it comes down to is this: when I felt bad about my body I considered myself “bad.” Now that I feel good about my body, I consider myself “good.” But the truth is, the size and shape of my body isn’t what makes me either good or bad. If we’re judged on anything, it should be our actions, our beliefs, and our values. Judging ourselves as either good or bad simply on the size of our bodies is ludicrous on its face.

This is the basis for what is called the “body positive” movement. If you’re not familiar with it, the body positive movement is all over social and traditional media these days. I just finished a book by activist Brittany Gibbons called Fat Girl Walking: Sex, Food, Love, and Being Comfortable in Your Skin…Every Inch of It. Besides being hilarious, Brittany offers a brutally honest look into the life of someone who has decided that she’s not going to take a backseat to anybody just because she doesn’t fit into the typical mold of a “perfect body.” Brittany became a wildly popular blogger and national spokesmodel—known for stripping on stage at TedX and standing in Times Square in a bikini on national television, and making skinny people everywhere uncomfortable. Freaking. Awesome. 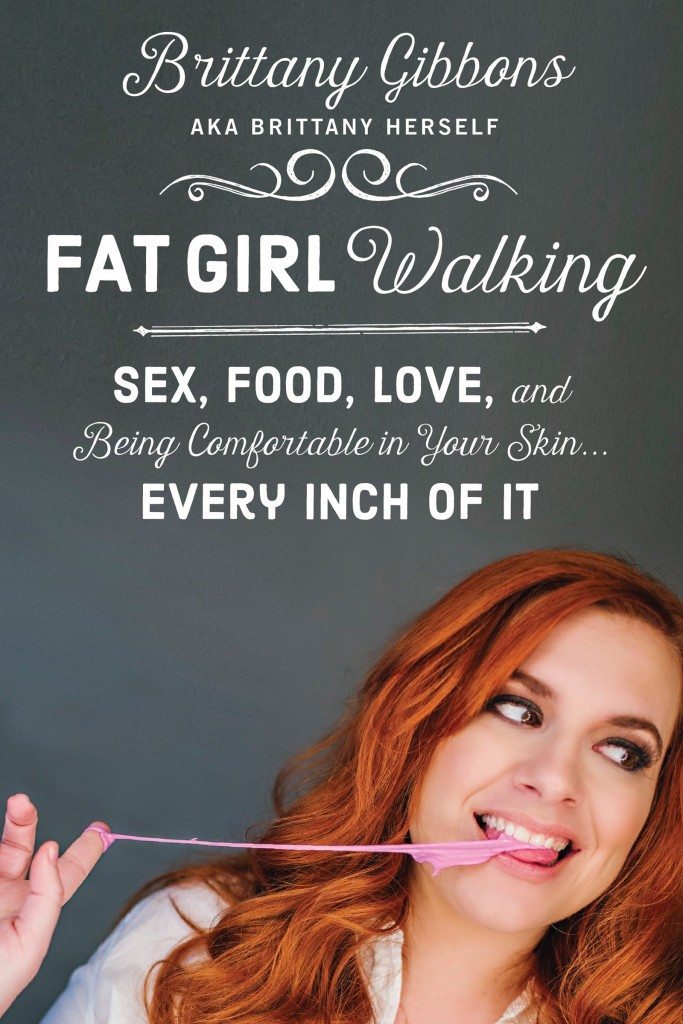 Another one of my new favorite spokespeople in the body positive movement is Whitney Thore. Whitney is the star of the TLC reality show “My Big, Fat Fabulous Life.” Now, I’m gonna confess, when I first saw this show advertised, I kinda rolled my eyes and thought, “Oh geez, what’s this? Why are we glorifying obesity?” But something really intrigued me about it, so I watched. What I learned is that Whitney is a charming, talented, funny, straight-shooting, sometimes hard-working, sometimes lazy girl who procrastinates … who is an entirely normal, likeable woman. In fact, she could be any of us; her size is part of who she is, but it doesn’t define or limit her. She struggles with health issues related to her weight (and in her case, the weight is caused not just by overeating – which she admits she does – but also by Polycystic Ovary Syndrome or PCOS, a hormonal disorder that wreaks havoc with your reproductive system and is known to cause weight gain). Her weight isn’t glamorized, but she also doesn’t apologize for wanting to be happy, just as she is. And understand, she’s not just “curvy” or plus-size (which the modeling industry inexplicably still defines as a size 10) she weighs 380 lbs. so the whole bikini-wearing thing on national TV takes serious cojones. 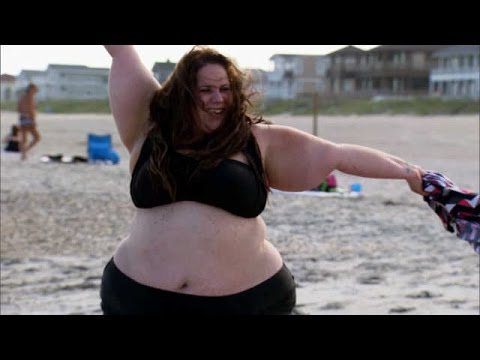 At my highest weight I was 265 lbs. Not only did I hide when I saw someone coming at me with a camera, as I got bigger, my world got smaller and smaller. I was extremely uncomfortable in any kind of public situation that drew attention my way (read: political events standing next to my handsome, very successful husband), but here was this young woman going to the beach in a bikini … on national television. Her courage is unfathomable to me.

Both Brittany Gibbons’ book and Whitney Thore’s TV show really got me started thinking that I needed to examine my own assumptions about physical beauty and self-worth. While I’m totally willing to accept that they’re beautiful and deserve happiness no matter their size, I still feel that my own value is tied to what I look like. Having now admitted that, I’m very uncomfortable with the situation and very much want to change it.

Don’t get me wrong, I don’t feel like my weight loss was a mistake at all – after all, I’m much healthier than I was and I am so happy that I’ve found accomplishment as an athlete, definitely something I could not have done 120 lbs. ago. But I don’t want my happiness and sense of intrinsic value to be dictated by what I see in the mirror. Not only is that important because I still consider myself a big girl, but because – well shit, who can deny it? – I’m getting older! That reflection I see in the mirror has a lot more wrinkles these days than it ever did before. And not just those endearing little “laugh lines” but deep wrinkles that will never be fixed by a better moisturizer or any product that can be purchased on an infomercial. These days I see more and more saggy, crepe-y skin that looks alarmingly like my grandmother’s. I long to be one of those people who embraces the coming changes rather than cursing each passing year, trying desperately to cling to their youth. At some point it just seems sad to be that older woman (or man) who gets hair plugs and multiple facelifts or dresses too young for their age. (And can we all agree that a little bit of animal print clothing goes a long way?)

I see this as my next important breakthrough. Maybe it’s bigger than that; I hope it’s bigger than that. Maybe it’s our next breakthrough as a society. Maybe we all need to start asking ourselves some tough questions about why we follow the Instagram accounts of young women barely out of puberty who flash their tight abs all over the place, as if that’s some sort of huge accomplishment. Or the bootylicious “fitness” accounts that encourage what I refer to as the pornification of fitness. But idk, maybe I need to just chill out about that too. After all, they’re just doing what they feel they need to do to be happy, and how can I fault them for that? 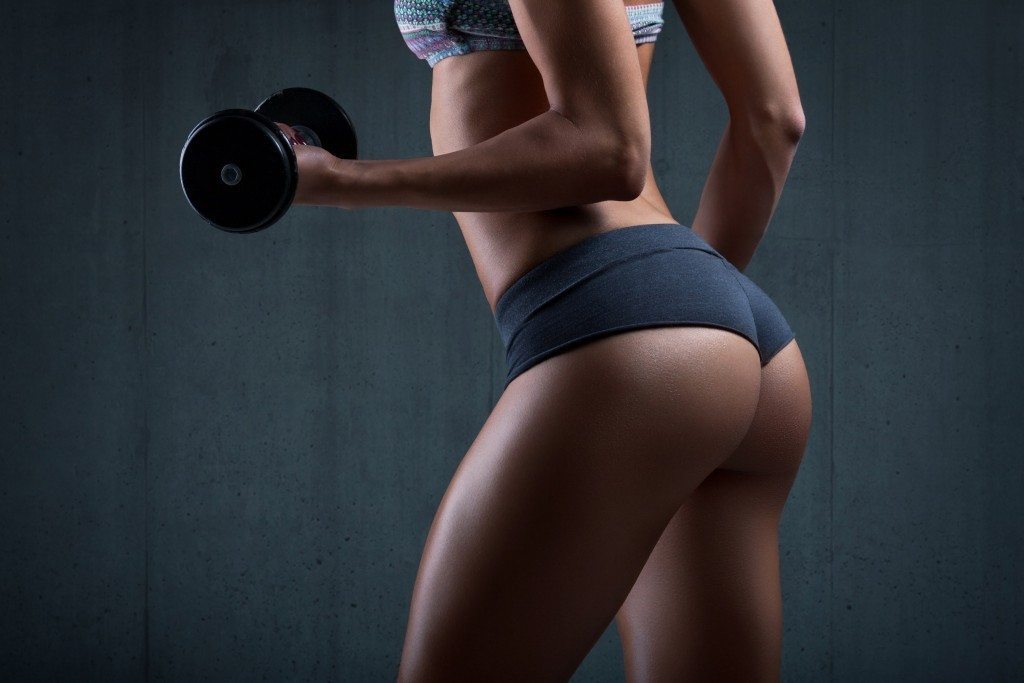 I’ll admit I’m late to the whole “You do you” party, a phrase that I wasn’t familiar with until my 16-year-old son used it on me when I was ranting about something somebody had done that pissed me off and I was trying to justify my pissed-offedness. Apparently it’s a phrase that a lot of Millennials use that means sort of “to each, his own” or what I interpret as meaning “everybody’s just doing what they need to do, so lay off.”  When I researched the phrase I realized that in modern media it’s being used by feminists and equality activists alike who seek to emphasize inclusion. Well, nothing wrong with creating a bigger umbrella as far as I’m concerned. And if it means that we create space in the world for the okay-ness of lots of body sizes, it works for me. 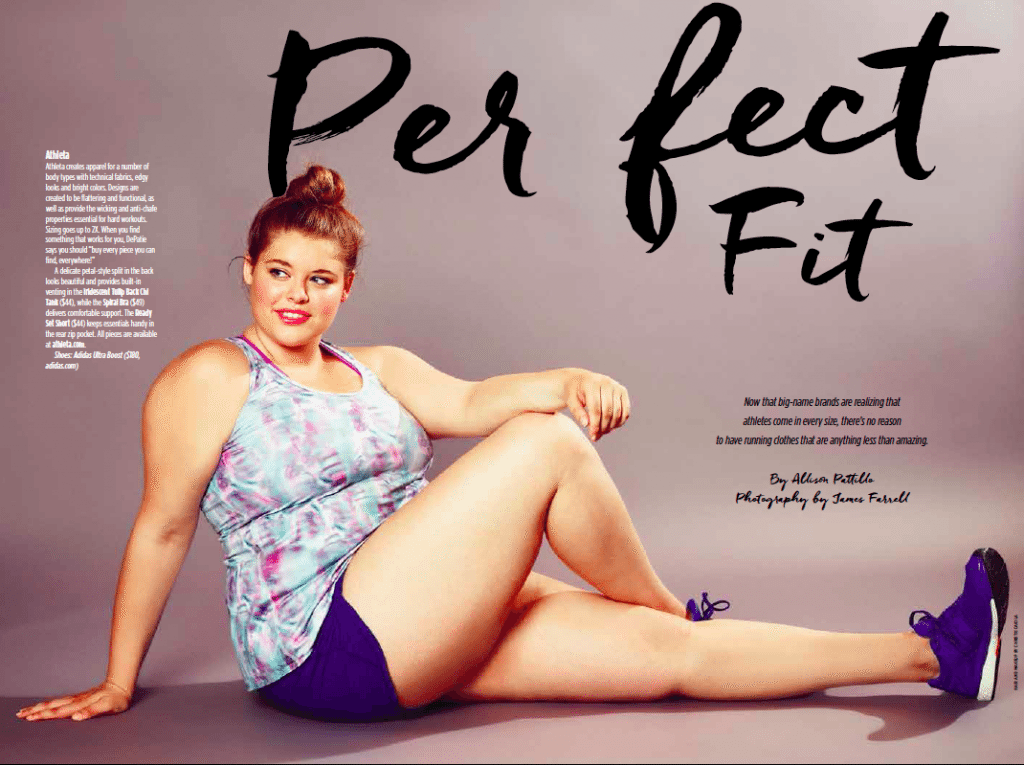 It was these two body positive trailblazers – Brittany and Whitney – that got me started thinking about my own situation. I had considered myself “cured” of my body image issues because I’m no longer overweight, but I’ve come to realize that I really only transferred my judgment about my body from negative to positive because I now considered my own body acceptable. When I dive into this deeper I’m forced to ask myself the question, “Acceptable to whom???”

I won’t even pretend to have any answers here. I’m just starting to unravel this myself. And as much as I wish I could have loved my body at 265 lbs. I know I could not have. But here’s what I do know: I don’t want my self-worth to be tied to what I look like, even if I feel pretty good at this moment about that. If my self-worth rests on what I look like then I’m in big trouble … as I get older, if I regain weight, if I’m in an accident and become disabled or disfigured … what happens then? Do I go back to avoiding mirrors and hating myself all the time? I don’t want to live that way anymore.

What I know for sure is just this: I want to be healthy and fit. I want to be strong and capable. I want to be happy and have a high-quality of life, and I want that for everybody no matter their body’s size. But I’m not gonna lie: I’m probably (okay, definitely) gonna keep coloring my hair and using whitening toothpaste. I want to look as good as I can (within reason, of course) as long as I can. My struggle is going to be trying to figure out how to stay true to my goals of feeling good and staying healthy without becoming a slave to the idea that I must look good in order to have value as a person.

Will you join me?

59
SHARES
FacebookTwitterSubscribePinterest
Tumblr
In-Person Personal Training
Work with me one-on-one to improve lean muscle mass, cardiovascular endurance, and functional movement through weightlifting, body weight strengthening, and resistance training.
Learn More
Healthy Life Coaching Online
Whether your goal is to lose 100+ pounds (like I did!) or to break through long-standing barriers, we will empower you to reach your goals through evidence-based practices that will transform your health, happiness and longevity.
Learn More