Kids Need Their Own Reason to Lose Weight 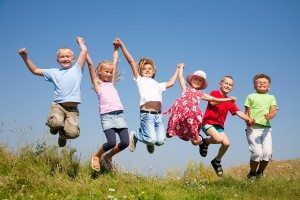 Teaching your kids the value of eating healthy food and exercising evolves from very simple messages when they’re 3 years old to much more sophisticated conversations when they’re 13. The 3-year-old just wants to hang out with you in the kitchen, help tear lettuce, maybe sample the ingredients while you’re cooking. The 13-year-old already has picked up your family’s values and patterns around food and exercise. S/he has internalized those values and now has his/her own beliefs and behaviors to reflect that.

If you’re the parent of a very young child (or children) you’re keenly aware of how they emulate your behavior. You’re probably making an effort to serve nutritious foods and introduce them to a variety of healthy options. But you may also have some baggage of your own that you’re serving up, without realizing it. In “Our Crazy, Mixed-Up Attitude About Food” I talked about the mixed signals we send kids when we talk about the importance of healthy eating, yet act in ways that contradict that value.

In fact, this is the mistake I made for years. I talked a lot about eating healthy foods, yet I had a shopping cart full of emotional eating issues of my own. As a result, I routinely brought unhealthy food home from the grocery store and served it to my family.

I introduced them to Eggo waffles, SpongeBob-shaped macaroni & cheese, Go-gurt and lots of other “kid-friendly” foods. It certainly was not their fault that they came to see these foods as “normal” and expect them on their plates and in their lunchboxes. Likewise the same thing happened when we went out. The Golden Arches – or any of a number of other fast food outlets – offered a quick, fun, on-the-go meal option.

Even though I talked about eating healthy all the time, I created a food environment where food took on much more meaning than nourishment or even pleasure.

My kids came to expect their food to amuse and entertain them.

I blindly schooled them on how food could “comfort” them, or how it could satisfy their whim at any given moment. There is food all around us that does just that, make no mistake.

Because of the conflicting messages and behavior that I demonstrated, 3 out of 4 of my kids became overweight in the late-elementary, early middle school years. Two of them “outgrew” it as their tastes matured and developed. One did not. He became obese.

Much more about his story coming soon, but for now let me say I learned a lot going through this experience with him.

I became determined to help my son find a healthier approach to eating for two reasons:

What I learned in helping my son is that kids are no different from adults in this regard. Just as with an adult, a child must find his own internal reason why eating healthier and moving his body is valuable.

As I explained in “Gatekeeper, Not Warden” creating a hostile atmosphere, where a parent hovers over the child, judging their food choices and telling them they “shouldn’t eat that because they’re going to get fat” does nothing to inspire a child to eat healthier. In fact, it has quite the opposite effect, driving those choices out of sight and instilling fear, guilt and shame.

Not a living soul ever lost a pound (not permanently, anyway) out of fear, guilt or shame. No adult, nor any child.

Instead, parents must model the behavior we want to see in our kids when it comes to making healthy food and exercise choices. We communicate why it’s meaningful. We project a positive attitude that demonstrates the pleasure of living in alignment with our values.

We walk the walk.

We talk the talk.

And we dig in and do the work with them; more on that next time.

Teaching kids to live healthfully is a tricky business in our crazy “food carnival” world. It’s even trickier when you do what I did and spent the first years of their lives teaching them it’s okay to misuse food.

When we know better, we must do better.

Losing weight is hard. That’s true for both adults and kids. But it gets easier when we get our heads on straight about our role as parents and resolve to do better by our kids. And they’re so damn worth it!

7
SHARES
FacebookTwitterSubscribePinterest
Tumblr
In-Person Personal Training
Work with me one-on-one to improve lean muscle mass, cardiovascular endurance, and functional movement through weightlifting, body weight strengthening, and resistance training.
Learn More
Healthy Life Coaching Online
Whether your goal is to lose 100+ pounds (like I did!) or to break through long-standing barriers, we will empower you to reach your goals through evidence-based practices that will transform your health, happiness and longevity.
Learn More