Which Fitness Band Is Best For You? 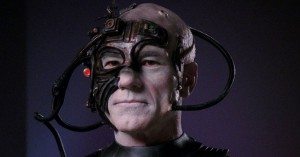 Some people really get carried away with this whole “wearable technology” thing, don’t you think?

Our discussion of technology and weight loss would be incomplete without a look at the wearable fitness devices that are all the rage these days. I recently bought a Jawbone UP24, so I count myself among the believers. I’m loving the analysis of my sleep patterns and hoping that this will give me insight into improving my sleep habits. From the look of it, my sleep could use an upgrade! 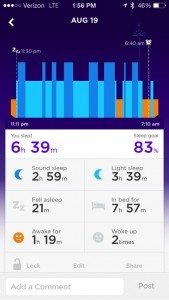 But before we get ahead of ourselves, let’s take a look at the top rated wearable tracking devices, their features and – of course – how much they cost. 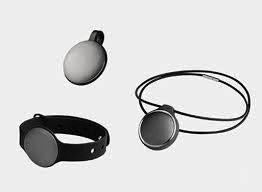 Unique to the Misfit is the device’s versatility: wear it as a wristband, or detach the disc and wear it around your neck or clipped onto clothing. The disc is very lightweight (0.33 ounces) so you won’t even notice it’s there. It syncs automatically with both iOS and Android devices and tracks all the basics that the other top devices record: steps, calories expended, distance, and sleep (light and deep). As a swimmer I love the fact that the Misfit is water-resistant. It is definitely in the minority there, as most devices aren’t meant to be submerged in water. 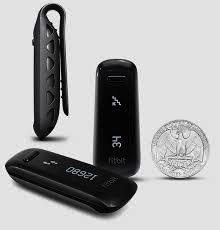 Like the Misfit, the Fitbit One can be clipped onto clothing for those who prefer that to a wristband-type of device, though optional accessories make it truly wearable. The Fitbit One tracks steps, distance, calories burned and stairs climbed. It monitors your sleep and wakes you with a silent alarm (it vibrates), and it syncs with most phones and tablets automatically. The Fitbit One is a little powerhouse (it weighs only 0.28 ounces) of information and allows you to set goals, view your progress and earn “badges.” Another great feature: you can export your Fitbit data to several popular fitness apps. Some of them – including SparkPeople, Lose It!, MyFitnessPal, and MapMyFitness – let you import their data into Fitbit’s dashboard. Very nice!

Worth mentioning: The Fitbit Force is a top-rated tracking device that was voluntarily recalled recently due to consumer complaints (just under 2%) by users who experienced a rash caused by the wristband. Reviews of this device were overwhelmingly positive, so fitness gadget enthusiasts everywhere eagerly anticipate a new version coming out soon! 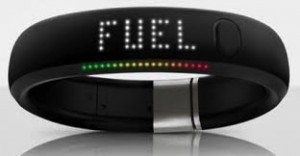 I’ll give you all the relevant product features of this device, but I’ll also tell you that I owned one a couple years back. It felt clunky and tight to me (I have boney wrists, but reviewers on several sites also cite tricky sizing), and I went through two that broke pretty quickly so I stopped using it. As with other devices, the Nike+ FuelBand tracks dozens of everyday activities, recording each step taken and calorie burned. Unlike the smaller devices, it also tells the time of day, so you can leave your watch at home. Nike uses the “Fuel Goal” incentive system to keep users motivated and the device syncs automatically with your phone, where progress is shown in real time throughout the day. If you’re interested in gaining more insight as to the quality of your sleep, choose another device. The Nike+ FuelBand doesn’t do sleep mode. 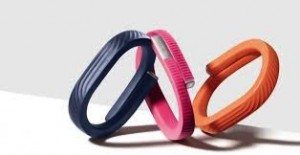 Ask me if I like things that come in pretty colors. Go ahead, ask me. Yeah, I do. And smart marketers know that. Having said that, it doesn’t matter what color the device is if it doesn’t work well. As I stated earlier I just bought a Jawbone UP24 and I’m happy to report that … so far, so good! You saw my “sleep report,” but the activity report is equally useful. Even though I always say we don’t exercise so that we can eat more, it’s interesting to see how many calories we burn throughout the day. And dig this: powered by Foursquare, the app “knows” where you are, gives you the restaurant’s menu to choose from, and can enter a food or drink from that menu directly into the app. Took me about a nanosecond to record my tall nonfat latte. So. Damn. Cool.

Depending on your needs, interest and budget you can enlist the help of one of these smarty-pants devices to help you streamline your food and fitness tracking. But as I said in “Using Technology in Weight Loss,” these high tech devices can give you insight and motivation, but they cannot make you put down the double bacon cheeseburger!

So whether we’re talking about wearable devices or apps, all the technology in the world is no substitute for good old-fashioned hard work.

Losing weight is hard work, there’s no getting around that. But it gets easier, and investing in the right tools can really help. And you’re so damn worth it!

13
SHARES
FacebookTwitterSubscribePinterest
Tumblr
In-Person Personal Training
Work with me one-on-one to improve lean muscle mass, cardiovascular endurance, and functional movement through weightlifting, body weight strengthening, and resistance training.
Learn More
Healthy Life Coaching Online
Whether your goal is to lose 100+ pounds (like I did!) or to break through long-standing barriers, we will empower you to reach your goals through evidence-based practices that will transform your health, happiness and longevity.
Learn More