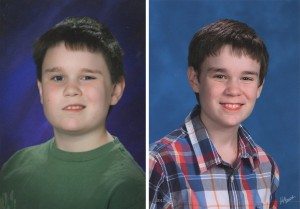 That’s my son Connor. He’s a happy, healthy 14-year-old these days, if a little on the snarky side. Gee, I wonder where he gets that?!? Ahem.

If you’re wondering whether it bothers him that I use him as an example of what I’ve learned about children and obesity, it doesn’t. We talk about it all the time, and he’s okay with my talking about our experience. Just like me, Connor believes that you have to set aside your own squeamishness and fear about being public with your struggles, if it means you can help someone else. Smart kid.

Connor is the youngest of my four kids and always has been the pickiest eater of the bunch. When he was little, his tastes ran towards bland, white foods – no sauces or spices of any kind. Not even ketchup or pepper! Just like many parents I allowed this behavior because it got him to eat and it seemed the path of least resistance. I was a frazzled working mom, and the last thing I wanted when I finally walked in the door was a battle over what was on his dinner plate.

My older children had been picky too, but unlike his siblings Connor’s tastes never broadened. He basically subsisted on simple, white carbs, fruit and peanut butter. And he ate waaaaaaaaaaay too much of them. By age 9 or 10, he was obese.

It wasn’t until I came through my own weight loss transformation that I realized the gravity of the situation. Of course, I felt terrible for having allowed this to happen. Connor was clearly unhappy, yet he was also extremely sensitive about his weight and his eating habits. Extended family members poked fun and made judgmental comments about his food choices. This made him painfully self-conscious, and he dreaded family gatherings.

When his 11-year-old checkup approached I scheduled an appointment, but also spoke to his pediatrician by telephone beforehand. “Here’s what we’re gonna do,” I told the doctor. “You and I are gonna join forces and help this kid figure out a way to have a more balanced approach toward food.”

At the checkup Connor’s doctor ran through all the usual diagnostics, but he also opened a dialogue about how Connor felt about his weight and his eating habits. He showed us a chart of Connor’s growth pattern, including a projection of his weight if we changed nothing. It wasn’t good. Connor was already at the 95% percentile for weight (for his age, height and gender) and the doctor was able to explain in a very matter-of-fact way how problematic it is to go through life as an overweight person. He asked Connor if he’d be willing to join a group (“along with mom!” he said) of kids and parents who were working on getting their weight back down into a normal range. Connor agreed. He wanted help.

Within a few weeks we started a 16-week program (through Group Health Cooperative) that met weekly. Connor and I each had a calorie range (based on our age, gender, activity level) and activity goals we were to hit every day. We filled out food charts (old school, on paper!) where I wrote down everything we ate, including the portion size, number of calories and time of day eaten. We turned in those journals every week for evaluation by our facilitator. At the meetings, the parents talked through challenges while the kids spent part of the time meeting separately with a nutritionist or to run through an obstacle course or some other fun activity.

Many positive things came out of this experience, but most importantly we learned that we were capable of taking charge of Connor’s weight. During the group discussions, Connor was able to articulate why it was important to him to be a normal weight. At home, we measured and weighed food in order to learn appropriate portion sizes. We evaluated the calorie difference between ½ cup of corn vs. ½ cup of green beans. (Hint, hint: if you have the green beans you save calories, which you can use toward dessert!)

All of this is to say, Connor came to own the decisions he made about food and exercise. In the months that followed, if I walked in the door and he’d made his own lunch, I would find two tablespoons in the sink: one with peanut butter on it, one with jam on it. Connor had learned that you make a PB&J by measuring one tablespoon of each and spreading them on bread!

He had completely internalized the lessons learned in the class. He measured even when no one told him to. He measured because it mattered to him.

I am completely in awe of this kid.

My son learned something that it took me until my mid-40s to figure out: you must have your own internal reason why living healthfully is important. That is the only way it works.

Losing weight is hard, even when you’re a kid. But it gets easier when mom and/or dad help you learn the tools, habits and behaviors that will get you there. And let’s face it, these kids are so damn worth it!

132
SHARES
FacebookTwitterSubscribePinterest
Tumblr
In-Person Personal Training
Work with me one-on-one to improve lean muscle mass, cardiovascular endurance, and functional movement through weightlifting, body weight strengthening, and resistance training.
Learn More
Healthy Life Coaching Online
Whether your goal is to lose 100+ pounds (like I did!) or to break through long-standing barriers, we will empower you to reach your goals through evidence-based practices that will transform your health, happiness and longevity.
Learn More