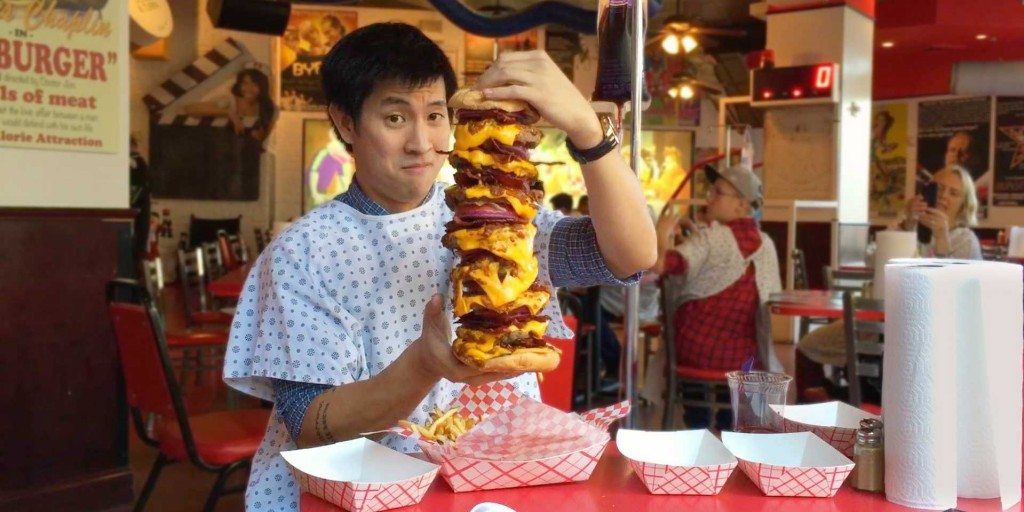 A friend’s recent trip to Vegas led to a Facebook post that included a photo of the “Heart Attack Grill,” famed for its single, double, triple and quadruple bypass burgers. There’s even an Octuple Bypass Burger (eight patties) that’s just shy of 20,000 calories – not including the Flatliner Fries – which holds the Guinness Book of World Records for the highest calorie burger. According to the sign out front, anyone weighing more than 350 pounds eats free – all day, every day. 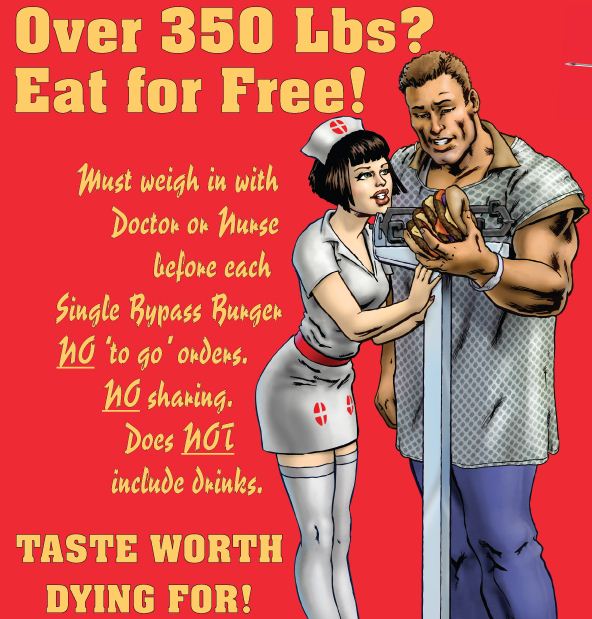 I hadn’t ever heard of the place, but apparently it’s legendary, a Sin City “must-see” for many.

The Heart Attack Grill is an extreme example (fortunately) of our strange relationship with high-calorie, high-indulgence food in America. With it’s hospital theme (patrons don hospital gowns upon entering) and waitresses outfitted in sexy nurse garb (don’t get me started; this is absurd on so many levels), the Heart Attack Grill epitomizes how messed up our relationship with food really is. 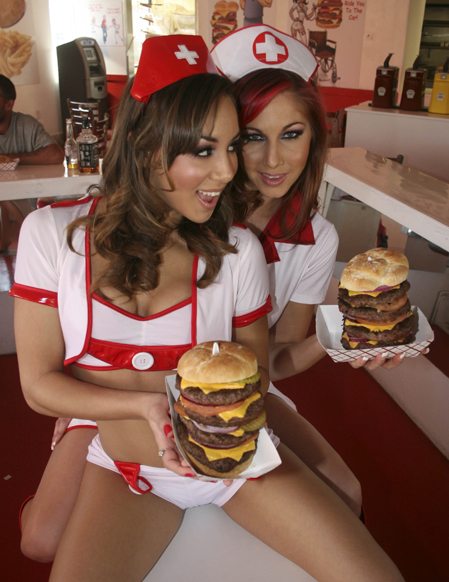 It isn’t just that Americans like to get the biggest bang for their food buck (they do); we want to be entertained by our food.

Ever since I lost 120 pounds – over 8 years ago – I’ve noticed this strange tendency to make a joke out of extreme food such as this. Ever seen “Man vs. Food” on the TravelChannel? Host Adam Richman travels America to take on some daunting food challenges, such as attacking a 13-pound pizza in Atlanta and a gargantuan Sasquatch Burger in Memphis. 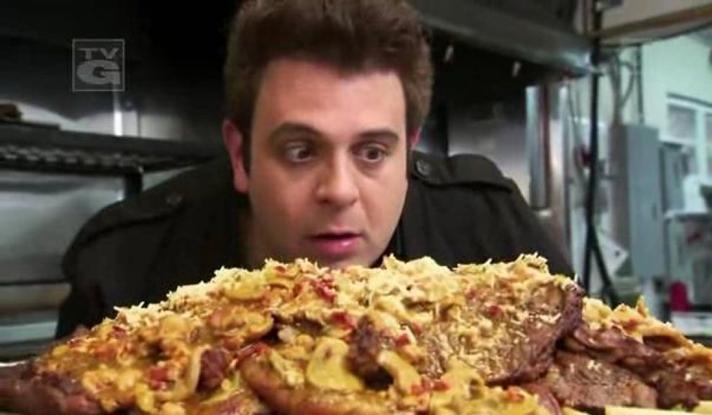 This is hedonistic eating at its grotesque extreme.

But this behavior reaches far beyond the Vegas strip or made-for-TV extremes. Much of what passes as ordinary fare at restaurants is pretty darn extreme. Think: Outback Steakhouse Bloomin’ Onion (nearly 2,000 calories and 155g of fat), or iHop’s New York Cheesecake Pancakes (1,030 calories), or even Starbucks’ Pumpkin Spice latte, which can be as much as 510 calories (20 oz., with whole milk and whip).

You’ll get no argument from me that this stuff tastes good. Lord knows I ate more than my share of it for the first 44 years of my life before I realized I was slowly killing myself with food.

Of course it tastes good! But that’s not really the point.

The point is this: what the hell are we missing in our lives that we need to constantly comfort, soothe, distract, indulge and amuse ourselves with these culinary wonders? Why are we receptive to the advertising that tells us we “deserve a break today”? Why do we fall prey to the lure of marketers who seduce us with pictures of happy people indulging in obscenely decadent foods, laughing and having the time of their lives? (Side note: have you ever noticed that the ads show people who look like they probably don’t actually eat the food – at least, not very often?)

Food is pleasurable, absolutely. We appreciate its taste, smell, texture and mouth-feel. Food sustains us, too. It is fuel for our bodies, giving us energy and stamina.

Where we run in to problems is when food crosses the line from pleasurable to one of our primary sources of pleasure. And you can bet that food manufacturers and big chain restaurants know that if they constantly up the ante on that pleasure factor, we will keep coming back for another hit.

But as someone who endured morbid obesity for more than twenty years I can say unequivocally, the pleasure is short-lived. In its wake we’re left with guilt, shame, misery and an unhealthy, oversized waistline. Ultimately I decided that the fleeting pleasure I found in my beloved Cinnabon cinnamon roll (879 calories) was not pleasure at all; it was a poor substitute for pleasure.

This kind of pleasure is just smoke and mirrors. It’s like praying to a false idol: empty and destructive. And just because it seems that everybody’s doing it is no reason for us to do it. Don’t think for a second that I mean “us” as in overweight or obese people either; nobody should eat this shit. It’s poison.

It is our national disgrace.

We are one nation, overfed. It’s not funny, and it must stop. 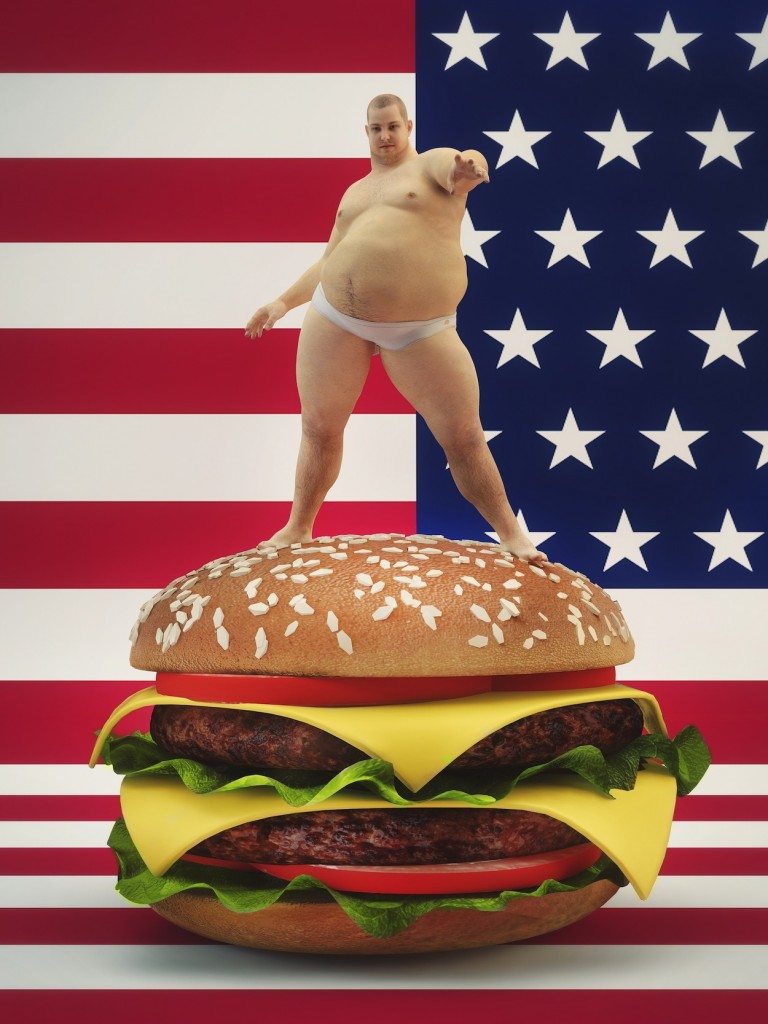